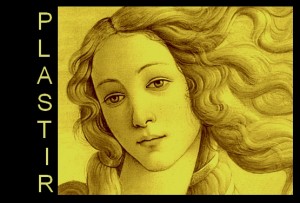 Since Greek antiquity, plasticity (root: plassein) has referred to the working and modelling of materials, the taking on, the creation of or giving birth to form. The verb plastir, introduced in the French literature during the 12th century has the same significance and is the origin of the name of our new review, PLASTIR, in which the various attributes of plasticity are explored. The most frequent, often misdirected and ambiguous assignment of meaning to this term, is that of a soft and passive elasticity. In contrast, we seek contributions that emphasize the dynamics of plasticity which have been occulted or misunderstood due to their very universality. The fundamentally bijective character of the plastic process is not exhausted by a simple change or deformation of shape, but takes part in the genesis and the final, definitive emergent product, whether of art or science. PLASTIR seeks to bring out the instantiation of this dialectic, looking beyond aesthetic constraints towards a new semantics of plasticity. It is directed at increasing the intelligibility of the world in the sense of its unfolding from space-time to biodiversity to human plasticity, as in the myth of Epimetheus.

The PLASTIR review will cover the fields of arts, sciences and philosophy, in particular their epistemological paradigms. Its ambition is to constitute a Plasticities-Sciences-Arts (PSA) archive of publications on the concept of plasticity, made up by regular contributions from its members and guests, with the objective of achieving appropriate recognition of plasticity as an object of research. A common problem is that many authors use the term plasticity purely as a metaphor, or, on the contrary, in a limited specific, contextual and generic sense. The critical aspects of the concept are not really addressed – namely, whether a purely systemic property or a foundational one is involved. We suggest strongly that the second acceptation is the correct one. This implies that plasticity is not an isolated function, but corresponds to the structure of interactive processes in general. In this way one can take into account both the informational content of the moulded forms of the materials involved and their energetic contradictorial interaction with the plastic process. The approach results in revaluing not only the content of plasticity – the substrate of the term as process – but also the container – the signified of the form, the metaplasticity of the conscious human subject and the consequent attitude that it may generate in today’s society.